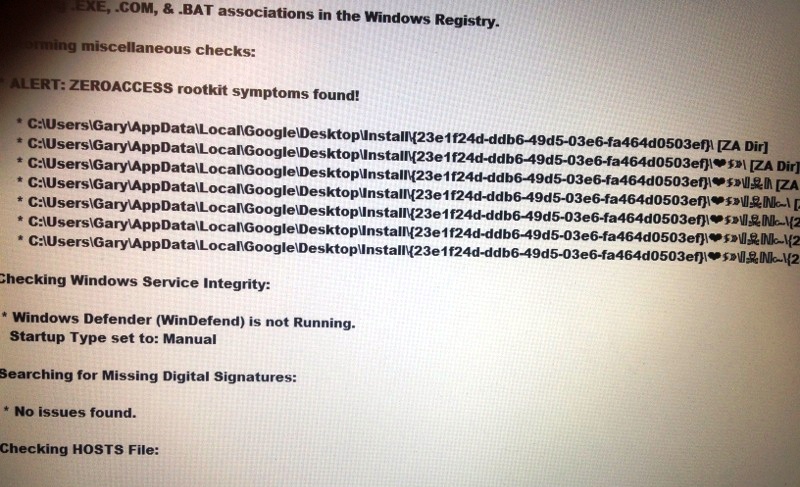 The pic above might not mean much to the common man.

For a technician, this is BAD.

It shows the record number of ROOTKITS found on a computer we’ve serviced here at PC Pitstop.

What’s a rootkit you ask?

‘Gain control of a computer system without being detected…’

Let’s just consider that for a moment….

A rootkits unwanted code is used to gain control over your computer by hiding deep inside your system. Unlike most viruses or worms, it is not directly destructive and its objective is not to spread infection as wide as possible.

What it does do, is provide access to all your folders – both private data and system files – to a remote user who can do whatever he wants with your computer. Every user should be aware of the threat they pose.

Rootkits generally go much deeper than the average virus. They may even infect your BIOS – the part of your computer that’s independent of the Operating System – making them harder to remove. And they are not just Windows-specific, even Linux or Apple machines could be affected.
Rootkits also scarily run at the same privilege levels as most antivirus programs making them that much harder to remove as the computer cannot decide on which program has a greater authority to shut down the other.

Once they’re in – usually undetected by even the best anti virus programs – they’ll liekly let in all their mates (as in the screenshot above!) and give you a nice big headache and interrupt your work or play. Not fun.

So be alert, be smart and best be calling PC Pitstop at first signs of dodgy doings in your computer!

Upgrade the RAM or HDD in your new or ex-lease…

This site uses Akismet to reduce spam. Learn how your comment data is processed.